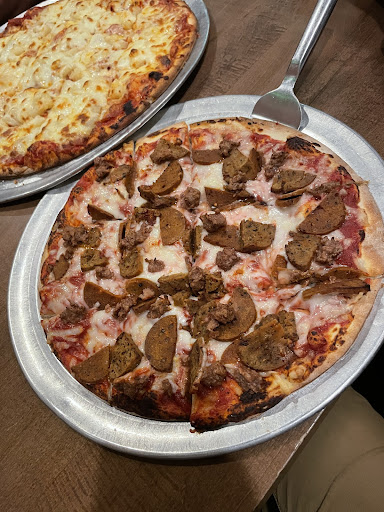 I’m one foot out the door heading to the airport and my buddy says “Be sure to get some walleye.” No, I’m not heading out on a fishing trip, but to Minneapolis, Minnesota for work. The walleye capital of… the world? Sure, why not. Even if that’s not true, I’m sure the Minnesotans would accept the title.

But here’s the thing… pizza is what I’m after. And lake fish pizza was not my first thought. Serious though, is that even a thing? Like, trout? Or walleye? I don’t know that I’ve ever seen that. Not even a white fish like halibut… do they even do pizza with fish (other than anchovies)??

I digress, but before we’re too far… if you DO know of a seafood pizza (and you’re not just trying to set me up for a stomach ache) email me. I will definitely try it.

Ok, ok. So we’re in Minnesota, and I’m NOT gonna eat a lake fish pizza… so then what?

Well, fortunately for me, our friend Greg scoops us up from the airport and he’s already decided we’re off for pizza. And to make things even more interesting, Greg is on an all plant diet, and he’s picked out Parkway Pizza, a spot that claims the ‘Best Vegan Pizza.’

I’m not solely plant based myself, but I’ve been known to enjoy some tofu and seitan. So when it comes time to pick a pie, “Greg, whatever you’re having, size it up and I’m in.”

So, the Vegavore – pepperoni, sausage, and hamburger. Might be a weird combo on a usual day, but since it’s all fake meat anyway, what’s the big deal!?

I ask Greg, “So, you know this place? Like, you a regular here?”

No – but he tells me about this butcher shop called The Herbavorous Butcher. It’s like a full-on, legit butcher shop, but everything in the shop is vegan. Side note—they ship their stuff. Check it out.

They’ve got salamis, pastramis, pepperonis, jerkies, even a full turkey dinner. These guys have everything, and this pizza place gets all their “meats” from the Herbavorous Butcher.

Back to the pizza shop. You’d think it’s gonna be some hipster pizza joint, but this place looks like the same pizza place you went to after t-ball games. Big high-back booths. A dated counter with the one register. Random tchotchkes on the walls. All those classic neighborhood pizza shop vibes AND fancy vegan meats. Kinda cool.

So the pie comes. Square cut—love that. Not that I actually love a square cut pizza, but they’ve got their way of doing things and I dig that. Greg ordered ours with light cheese. First thought, Ok he’s on an all plant diet, maybe it’s a health thing, going light on the cheese.

When it shows, though, he says, “Not too much cheese…I didn’t want to gross you out with the fake vegan cheese!” Haha… c’mon, man, you obviously don’t know me! I’m down!

The pizza looked just like I suspected—like pizza. First glance, I can see the rounds, the chunks, the quarters—the meats all divvied up a little different to give the pizza some texture. Now, color-wise, we could have had a bit more variety. I mean, they all kinda just look brown. 😂 Hey, that’s on me, I mean we could’a added some veggies or something to give it some flair.

Regardless, it looks like pizza, smells like pizza, and damnit, it tasted like pizza! I’m actually a pretty big fan of the fake plant-based meats. I find the texture interesting and they always manage to season it up just right.

First things first, a little sample of each of the meats. One at a time. Chew, chew, taste, taste. A little mindful eating to see what we’re really up against here.

The pepperoni was my favorite. Thick-sliced, halved, and offered a nice bite to it. And about that cheese, I wasn’t even mad. It was quite creamy. Almost like part cheese, part sauce. I’m not sure what I was expecting, but next time, I’m definitely getting the full blitz of cheese.

Crust-wise, we’re talking something between a thin and a hand-tossed. Crunchy and brittle, no folding, but in a good way. And the sauce… I don’t even remember, actually. I think I spent most of my time really studying that cheese.

What is vegan cheese, anyway? After a quick Google search… it’s like real cheese, in the sense that there are all different kinds of ways to make it. I wish I would have asked. Was it cashew? Soy? Welp… guess I’ll have to go back 😬

Parkway Pizza has all the classic pizza shop vibes and some new age toppings to boot. Great service and good prices, too. 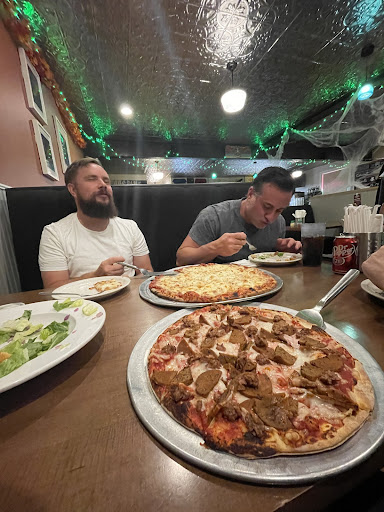